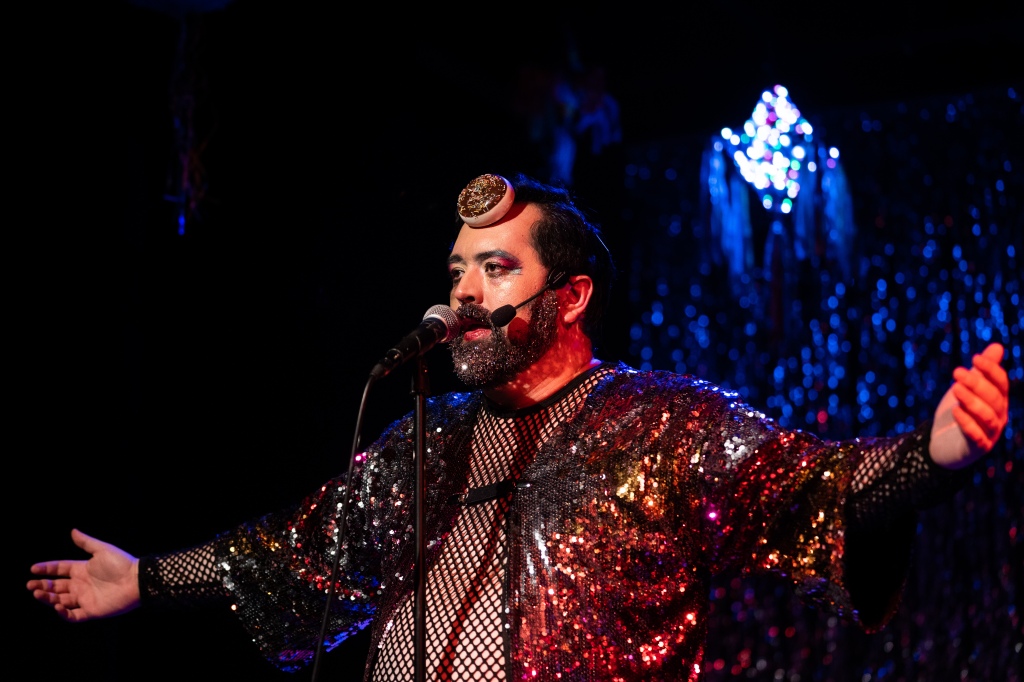 So, I got my first clapping man!

For a solo show I wrote, and I’m honestly over the gay moon. I never ever thought this could happen, I’ve been out of the theatre world for a while, so this is super super touching to me. I am very GRATEFUL to all the folks that helped me make this happen, Benjamin Shiu (Stage Manager), Hector Zavala (Technical Director), Grisel Torres (Lighting Designer), Nikki Meñez (Choreographer), Tanya Orellana (Scenic Consultant), Chris Sauceda (Composer/Sound Designer), The Go Go Boys! Chris Garay, and Corey Fischer!  and especially especially to Richard Mosqueda my director, who worked super hard to make this happen.

I have three more shows this weekend y’all. Get your tickets!

Review: Queer immigrant story sparkles in ‘Love in the Time of Piñatas’ 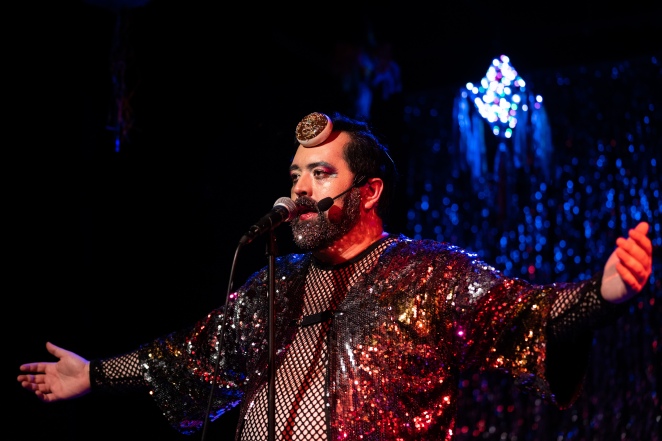 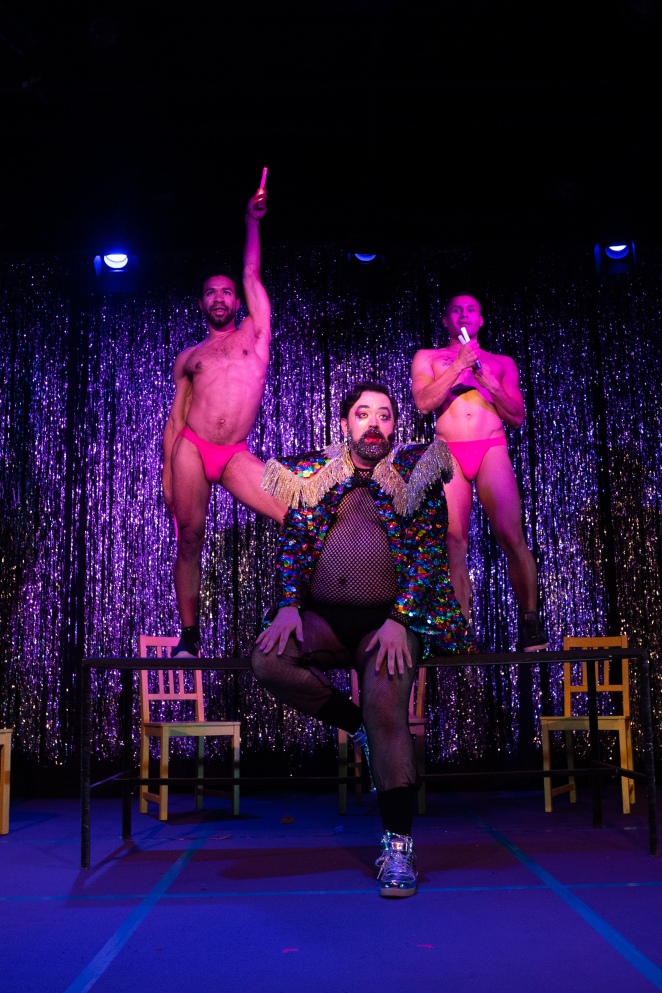 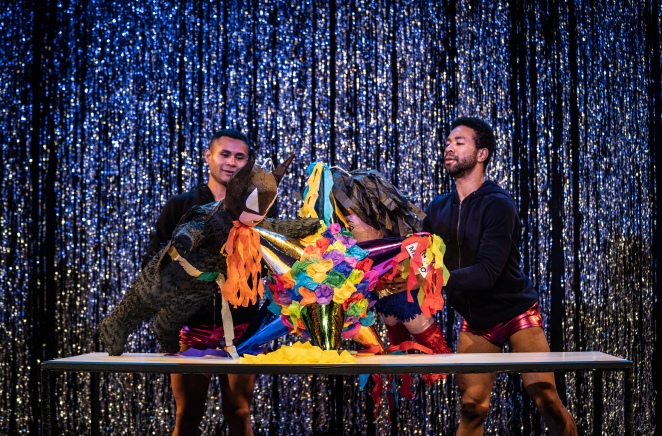 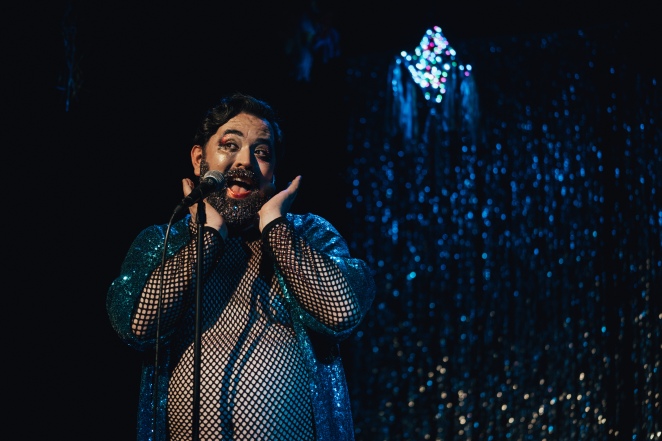 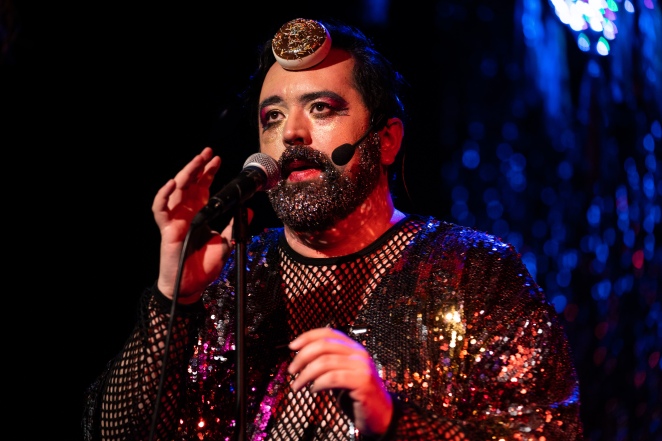 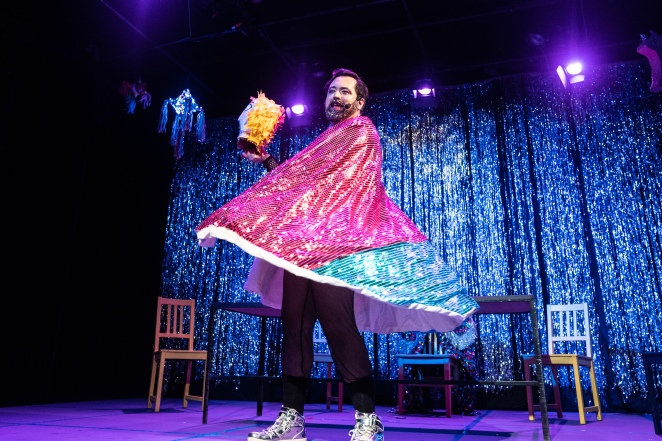 LOVE IN THE TIME OF PIÑATAS!

It’s been a while, and I’ve had a wonderful journey working on this show, from the workshop preview at Brava Theatre, to the arts residency at the Ground Floor at Berkeley Rep! And now my collaboration with Epic Party Theatre, this little solo show has gone through a bunch of stuff, but now I am ready to do it again, and show y’all how much it has grown!

Get your tickets now to LOVE IN THE TIME OF PIÑATAS at ZBelow with Epic Party Theatre!

Written and Performed by me! BARUCH PORRAS HERNANDEZ

Here is the SUPER COOL poster!! Art by Brie Spiel! GO HERE TO CHECK OUT HER STUFF! 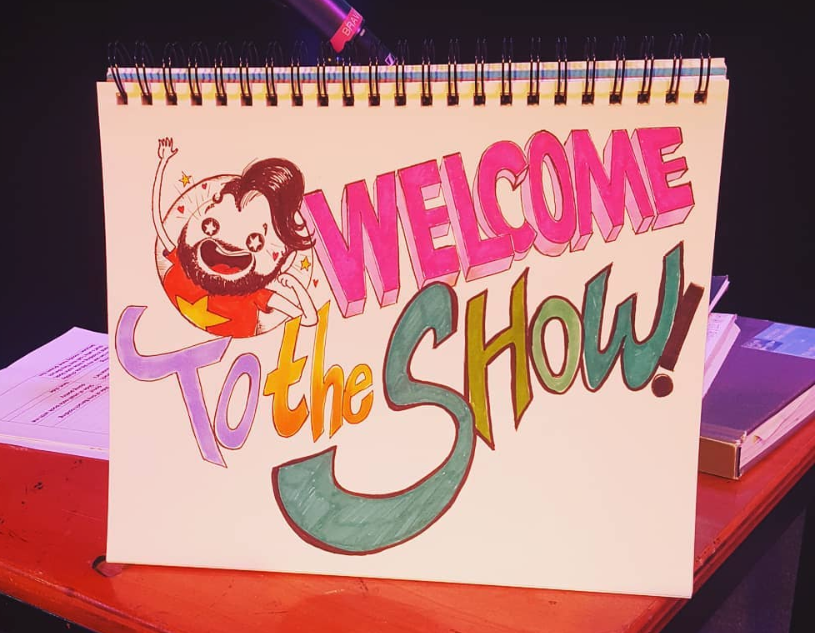 All My Friends Are Depressed! With Tiny Baruch!

Hi everyone, been super busy and swamped, but I wanted to tell you all that I’m doing a show called “All My Friends Are Depressed” with Tiny Baruch in August.

I’ve been doing a comic that I post mostly on instagram called #tinybaruch, well the real name is Small Blessings with Tiny Baruch, but whatever, lol. People seem to really like it, last June for the National Queer Arts Festival they asked me to do a show about it, and it sold out. The show is part presentation, part gay TED talk, part performance, part comedy, part storytelling, all about Tiny Baruch and the process and the why and there was donuts. The audience was fed donuts, because why not? BECAUSE I LIKE DONUTS!!

If you would like to get tickets before they sell out (my last two solo shows sold out) get em while you can by going here I WANT MY TINY BARUCH TICKETS!

Here is a poster for it, I made the art

Here is the original #tinybaruch art

Yes that is a Tiny Baruch meets The Little Prince, I had a deep connection to The Little Prince as a child, but so did every other creative artsy sad gay kid who is also an Aquarius,  it was the 80s, lol. Yes I read the book in French, I was a sad gay artsy gay Aquarian!

I hope to see you all at my show!!

here is some pictures from my last show at Brava Cabaret! 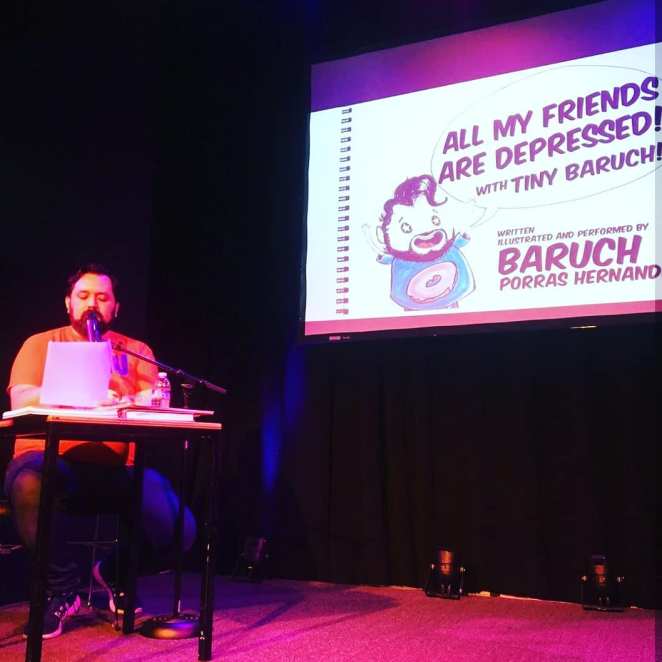 I’ve been away, for two weeks performing poetry, it was  dream come true for me, I sold a bunch of books, and I want to tell you all more about it but, I’ve been soooo busy! In the mean time read up on our last show, it got a write up from the Long Beach Post.

“If Hernandez tells you that he doesn’t remember much of the evening, you can assure him that he kicked butt. Literally. His posterior jokes drew belly laughs from the more than 250 people who attended the Sister Spit spoken word showcase at the Icehouse on Saturday evening.”

This was our last show, and I think one of our best shows, Los Medanos College was also incredible. It was tough, a really tough show for me because early that morning at like early in the am I think, I went to the ER and had the most painful 8 hours of my life. I’m fine, I think, (if you’re super curious, I don’t know, and the lovely Kaiser doctors also said “We don’t know, what happened to you.” so no need to ask) But after the ER I was only able to lie down for an hour, shower, and then we went to the show. I was delirious, still feeling the morphine, drained, exhausted, but I told my self the show must go on, and when I thought about sitting the last show out, I thought, life is short, what if this is the last time you get to perform poetry, just go up there. And I did, and I think my set went really well.

“As to what caused Baruch’s medical detour, he figured it had something to do with his addiction to donuts.”
LOL! I do remember saying something like that.

Click on this frowning picture of me to read the whole Article. 🙂 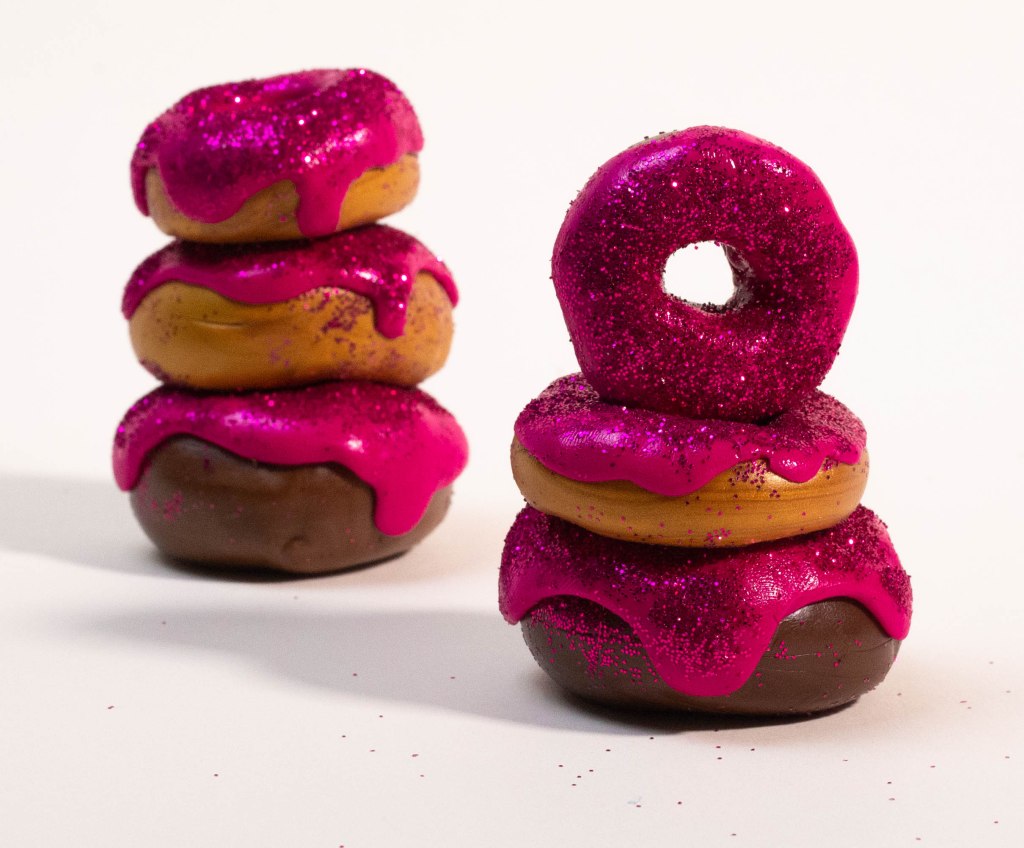 MY SMALL POETRY COLLECTIONS ARE NOW AVAILABLE FOR PRE-ORDER!!
My chapbooks “I Miss You Delicate” and “Lovers of the Deep Fried Circle” both from the beautiful folks at Sibling Rivalry Press  are ready for you! 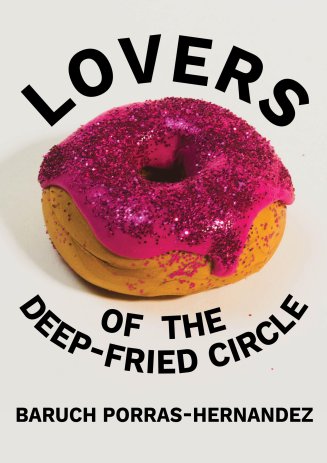 You can now pre-order and get copies of my first ever chapbooks to be actually published by a real publisher, not just stapled together in my living room!

Here is the link to get both! LINK!

Click here to just Get Lovers of the Deep Fried Circle 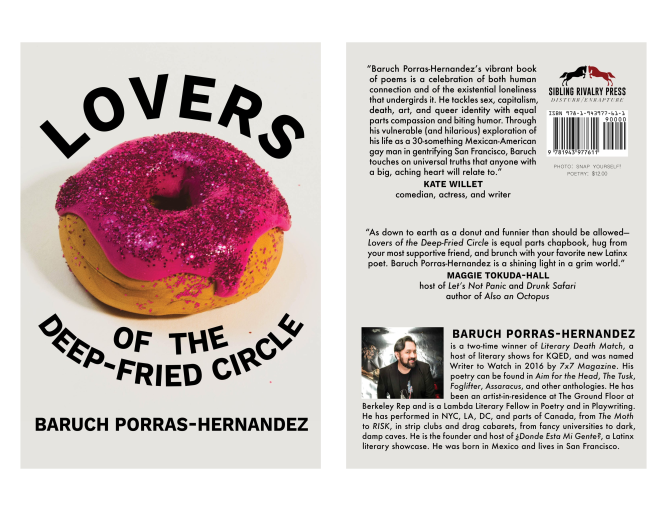 Click here to just get I Miss You Delicate

I started performing poetry back in 2006, it wasn’t until 2009 I started doing it professionally, I have gotten paid to perform my poetry all over the place, I’ve been very fortunate. I’m very grateful to Sibling Rivalry Press, Bryan and Seth for bringing my two chapbooks to the world. I started writing poetry when I was 12, and going through a rough time, I never dreamed I would have two little poetry collections like this, little gay dreams do come true.

Buy my books if you want to read some poems, buy them for your university classes, library, home library, your friends your enemies, haha. I love you all.

I’ve been super busy, getting ready for the release of my chapbooks and the latinx superhero project, so I haven’t been able to tell y’all about how DONDE ESTA MI GENTE got into SF Sketchfest!!!! Join me for one amazing comedy show featuring the best Latino comedians of San Francisco!!! The show is hosted by me and I hope you all come!!

The show is Tomorrow Friday January 25th at 10:30pm at Cafe Du Nord

and our headliner MARGA GOMEZ!!

I started ¿Donde Esta Mi Gente? in 2014 with the help of a grant from the incredible and vital Galeria de la Raza. I wanted a platform to support and showcase just how awesome and talented my fellow latino performers are. We did one big poetry festival, then performed at LitCrawl 3 times with KQED, have done Beast Crawl, collaborated with Radar Productions, performed at the Art Institute, performed at Strut several times, did one big show at Galerida de la Raza again in 2018, and started going comedy shows. I never thought we would ever get to be a part of SF Sketchfest, the San Francisco Comedy Festival I’m SUPER excited and super grateful to all of you, if you have come see a show, if you have donated to our shows, if you have been in our shows, THANK YOU! I cannot wait for tomorrow’s show, I hope you all come and bring ten friends each, because the line up is honestly GOODASHELL. Get your tickets now before they sell out!

My Next Comedy Gig is at MAN HATERS! I’M SO EXCITED I CAN’T STOP RUBBING THIS BEARD!

If you’ve never seen me do stand up, and live in the East Bay, now is your chance! Come hang out with me and some AMAZING and HELLA FUNNY stand up comedians who are all HELLA QUEER, I can say hella cause I grew up in the East Bay and I apologize for everything, jk I HELLA DOOOOONT!!!

This show is going to be super fun, please come, it’s only 10 bucks and at my favorite gay bar in the East Bay, the legendary White Horse bar!! With these other AMAZING COMEDIANS!

Go here to see the info of the other comics, cause they’re amazing!

HOPE TO SEE YOU ALL THERE, BRING ALL YOUR FRIENDS!!!

I approve of these things